Opening of the 2018 Sailing Season at South of Perth Yacht Club. 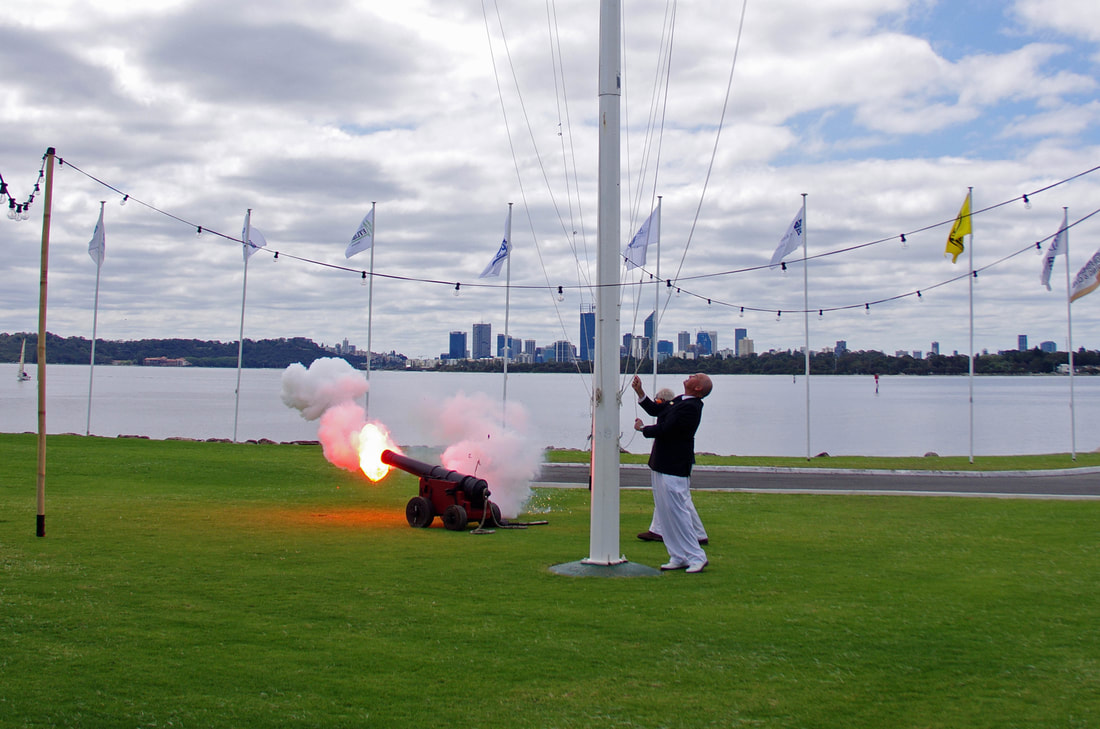 I want one of these on the foredeck skip!
No ones perfect!

And its clear that sometimes people forget to advise other people about what's going on. Ergo … two photographers at the opening day. Fortunately we knew each other and had things sorted out quickly and I'm sure that he had a good day too.  I also found out (late) that they had borrowed one of the guns from the Duyfkin and intended to fire it off. Fortunately I got a good series of shots, but the club was running around looking for a video of it going off. Well if they had asked me to do it...……?

I may sound a bit grumpy, but really!

Our guest speaker today was vice patron Len Randall and he did a fine job, even keeping his speech short.  Burgees were presented to the new flags and the welcome to country was presented by Marie Taylor. There were a number of other clubs present and it was good to see their new flags and their partners, not to mention the clubs own management team. Keeping in mind the idea of keeping it neat and tidy, they had everything rolling along swiftly and the event was on time. Hooray!  Things went off with a bang and everyone choofed off down to the pens.

It was a good day for sailing with an easterly that decided to swing into the south west and not push the limit. We had  a slightly modified format of a pursuit start, but it still meant we were hanging around for 3/4 of an hour until they got the sail past sorted. Eventually the board lit up and away we went...

I like this format, bloody hell... it was a continuous stream of passing boats and we did a fair bit ourselves. Always with your eyes wide open for a starboard tacker and some of the slightly dodgier boats ( new skippers) had us guessing, but it was fun on the water all the way up and down. Even the dash to the finish had the good ones quick enough to keep the height on the way to the finish line and the others struggled with the knocks as they came across the river. One comment though, we had the keelboats ploughing through the centreboards, both up and down hill. I thought that they had sorted out an area for them. Rob Males Jindarra and Chris Hines' Sagacious were playing dodgems with the lasers and 125's on the way down hill, we were keeping an eye out on the way up hill to Hallmark.

You'll have to excuse my bias toward the wooden boats. I sail on one and I really didn't have time on the way up to point a camera. But on the down hill.. lots of fun..

​The first lot of images are the onshore cut, the second are the on water images.