Where did I meet my first Musto? 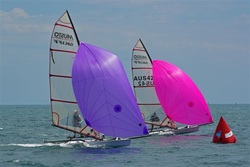 Suprisingly enough, a container of Musto's popped up at SoPYC and was in an unloaded state for a day or so. Naturally curious, a few of us pondered the use of them, until the name was discovered and googled. Fast things we thought and the race was on to see the first one on the water. An invitation to view them performing at Sail Freo led to some great images (storm light is good light) and since then, I been watching them around the river .

This is a look at the Musto's performing at their best.

A new addition to the event, some video from day 3

The Doctor is in!

A great sea breeze  kicked in by 11 am and stayed in for the period of the racing. Occasional holes in the breeze made it interesting for the sailors, but in the main they handled it very well. Minor breakages yes, but no busted booms or masts meant that the RO had picked the breeze within the range on the NOR and told the Dr to keep to it.

The first race started with a general recall and probably a good idea as one or two were playing catch up with the fleet. The second start line was clean and the Musto's were away. As I don't want to spoil you with results, keep your eyes on the screen.

The second race had 3-4 boats OCS and one did not return..... but the big part of the day was at the finish when 380 ( Ritchie Robinson)  fell over on the last gybe before the finish line. The images tell their story. And then 80 seconds later as the fleet caught up, 5 boats tried to make it over the line at once. Oops!   One of the five boats spoke to me afterwards and I wondered how they all made it. He swore that he just closed his eyes .... Opened them and he was over the line,  so he and 2 or 3 others fell over in relief. That's the best excuse I've heard for a while.

Day two of the Musto Nationals in Perth WA

It doesn't get any better than this. Everything from 8 to 10 knots in a westerly breeze and building into the south westerly that we know and revere.  This time I got to sit up on the top mark with Selwyn Castles and pull rope for him as the volunteer list was a little short. The first race was played under catch up conditions and the fleet was pushing it to get there.  Fortunately a timely wind shift caused an AP and most of the rest of the fleet arrived in time for the race.  The second race, well the breeze was already clocking left and we went from 245 down to 220 ( classic seabreeze ) and the whitecaps were starting to appear. The course was lengthened to .95 of a nautical mile and off they went again. The third race was extended out to a nautical mile ( from .95) and we were involved in a number of saftey issues that had us on the course looking after capsized craft. This meant of course that I could open up my area of effort and get more interesting shots. Enjoy the results, especially the last 10 or so when the boys were on the last down hill run.

Day Three at Mounts Bay Sailing Club with the Musto's

The day started with a stormy outlook and the wind out of the north east. What a day to be on the water. The RO got us out there and once we had taken up station, the next thought was the direction of the wind and throwing out the pick on the pin end boat. ( Yes I was shifted again ). The start got underway at approx. 1400 hrs + and the fleet enjoyed the breeze as it was.  The second race started in shifty breeze and dropping wind speed and a two lap shortened dash was set up . Fortunately the RO was monitoring  the situation and shifted the top mark, once it was clear that the south easterly had kicked in. With a short race and a glass out looming, every little puff was looked for and used to the best advantage. Then we towed everyone home and had that welcoming glass of cordial.!!

Day 4 at Mounts Bay Sailing Club with the Mustos

No wind worth while considering. Every one was ready and the wind ginned around out of the north, the south, the south east and finally out of the north west and died thereafter. The RO wisely called evrything off for the day and as I left, the boys had the BBQ going and every one was discussing tomorrow. Plenty of promise with a breeze due in in the afternoon however the three races will mean a busy day for the race team. 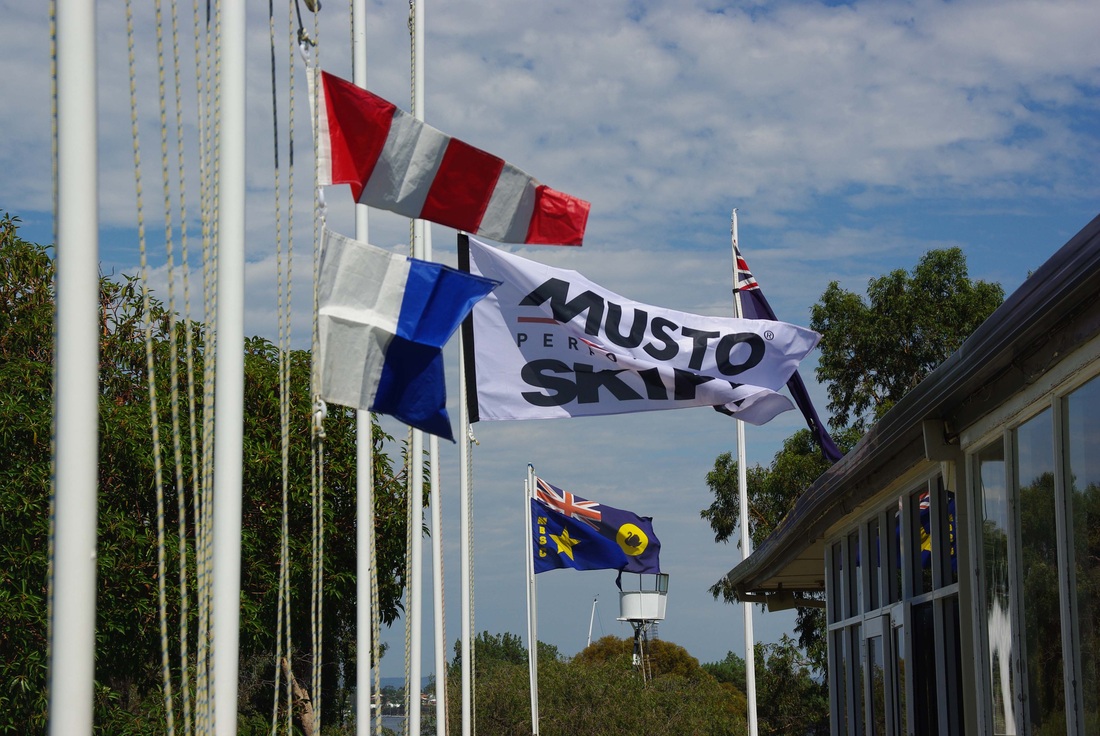 Racing called off for the day

Day 5 at Mounts Bay Sailing Club with the Mustos

I asked you to hold your breath.

The breeze went from a dead calm at 1200 to a roaring South Westerly by 1415 hrs.  When the Doctor comes in, he can be rather intrusive. We started with the knowledge that we had to do 3 races and the RO ( Andy ) set the course. The RO had problems with  volunteers and elected me onto the staff. The top mark with Selwyn, could have been worse, might have been on the start boat. So we set off again and sorted out a course with a top around 250 deg. and 5 and an half knots. Started to build a little..... away they went at 1300 hrs and the first images were sedate. So waited until the last boat made it around and took his photo.... and other fancy stuff. The breeze started to pick up a little and we went south to simulate a seabreeze. Went out a little too, almost another .2 of a nautical mile.
On the first rounding of the second race, the breeze kicked in, 10 knots to 20 with gusts to 25 knots and add 5 knots thereafter. By this time boats were falling over big time and it was the comment of a WA sailor, that he just eased his sheet out a fistfull and ran until he was ready to gybe. Alledgedly he stayed upright. The third race was sailed in a stable SW breeze of 20+ knots. The competent sailors were fine with this and put up a spinnaker or not. Survival was the issue, but the track was relatively flat and downhill was good.  See for yourself.

My thanks to MBSC, the Mustos, Steve, Wayne, Selwyn and Tessa. Oh yes, and the RO .. Andy!

To the Musto Sailors.

Thanks for the effort on the water. The DVD is now available and contains all of the above ( and a little bit more ).