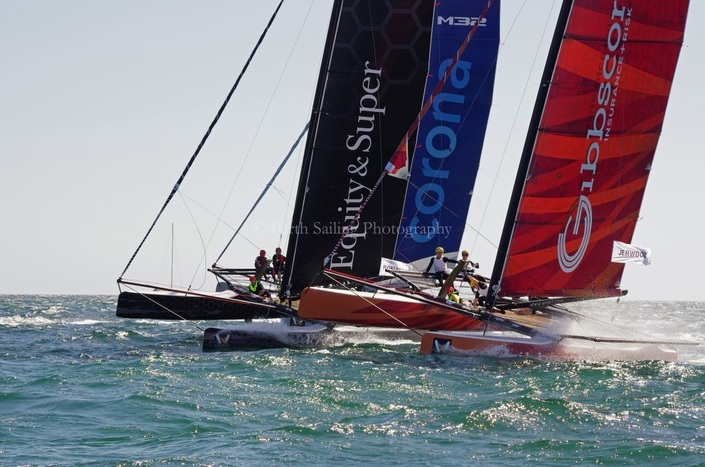 Never thought it would happen.

We've got the WMRT in Perth WA and in the natural viewing area of Bathers Beach where the finals of the 2011 World Championships were held.

While we applauded our river heroes for the sailing we saw last week, the foreign gods are already arriving.  They only look at the finish of the day and the racing. Losses are examined and mistakes reviewed. The next day they are armoured anew.

I've been following the MR32's with interest and it turns out that one of our favorite sons, Keith Swinton is already well qualified on these rocket machines. As a high number on the WMRT tour list he knows the competitors intimately and it's going to be fascinating watching. Due to prior commitments I can only follow this for a brief period but what I can do I will.

One day on Bathers Beach

Arriving early at FSC, it was fortunate that I was able to hop onto a passing umpires boat and get a lift around to Bathers Beach where I quickly found the ride for the day. There were two or three media boats so I jumped onto one that was going out early and found myself in the midst of the five boats that were to be used for the day. It was a day of fleet racing and the crews were to be rotated throughout the day with guests being invited on board to experience the racing. Awesome!

The breeze for the first two races was shifty and out of the east so it was generally slow stuff, but with the full sails and gennakers the boats still had plenty of zip. A small accident to a rack during a media interview ( not us )  had one of the boats being retired and another brought into play. And in came the breeze from the west.

A short period of inactivity ensued as they readjusted the course and after the first one or two races they put the first reef in as the breeze strengthened. The crews had changed by now and we were looking at some of the heavies of the circuit and they showed the difference between the good and the superb. Quick in corners, hiking hard across the reaches and sometimes finding lifts where no one else would think to.

By now we had worked out most the corners, angles and safety spots in case we were challenged by a speeding M32.
Lunch was eaten on the fly and as the day went by, the wind built slightly and bent around to the south west. 12 to 15 knots was a good performance envelope and not enough to scare the day lights out of the slightly less experienced amongst them.  By the way you only have a matter of seconds to compose a shot; you see them, then they are gone.
It's rather like photographing the foiling Moths. You sit in wait for them or you work out where they will be and shoot along that line.

As the light began to drop into the west so we went for the back lit shots where the spray would be enhanced, it also meant that face detail was lost, but I has a bit of luck with both the STS Leeuwin and a large tourist charter complete with chopper in the back ground.

Enjoy the images. I may be able to get some more, but this is what I'm putting up for now.

Thanks to the WMRT people who allowed me onto the course and to FSC who apparently is supplying all the people and boats to run this event. What a great day on the water.