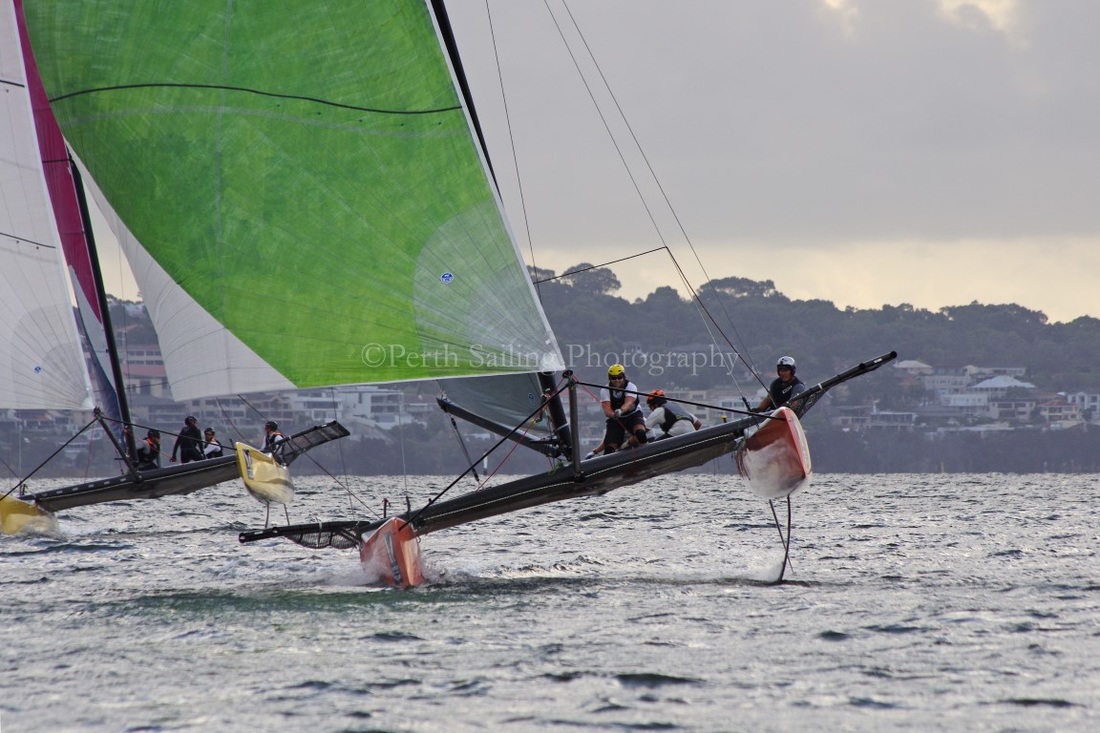 The drone boat was firing away with the bird in the air and was apparently too busy to pick me up, so I jumped onto a passing boat ( thanks guys ) and ended up on the finish/changeover boat. Good, a chance to see the competitors, have a chat to a couple of cat sailors I knew and generally work out what was happening on the water from their point of view. The easterly was still in and as the morning drew on, it started to wander a little and we found ourselves moving the finish boat once or twice.

The main problem at hand was the damage to one of the four M32's from yesterday and with only three workable boats the test at hand was to finish the round robins and announce the winner from the points issued. Keith Swinton had finally made it to town and had the Black Swan team on the water and one of his team driving rather than himself. It was unfortunately torturously slow going as only one match could be raced at a time.

Enjoy the images and I'll see you at Bathers Beach next week.
Thursday Morning at the SoPYC Match Cup 2016

Out on the water with a light Easterly blowing and the teams were already working their way through the round robins out on Melville Water East. Starter Les Swinton was in his element and working out of  Check Point as the start boat he had the line and length worked out. Out on media boat 2 ( and the drone boat ) I was in good company and they quickly showed me the layout of the course and where everything was to be found. Only having an hour or two we concentrated on corners and follows and some good city shots came through. It's a pity that one of the skippers picked up a mark in front of me, but it was a revelation to watch the yellow boat howl around the entangled boat and shoot off into the distance. Still these guys are only learning the ropes and what you can (and can't) do on an M32.

Enjoy the images and I'll be back tomorrow.
The M32's in their new livery
Once again, I was on the Swan for a social sail last Sunday and the opportunity to catch the M32's during their training process was too good to refuse. I'd packed a decent camera with me and as we moved off down the river, the cats in their new colours were already working the river training the crews for next weeks preliminaries.
The first sequence of shots were taken as we moved away down the river and it was a chance to see the crews get the boats up on one hull and get up to speed.
On our return, they were still hard at it and the skill level was certainly up there as we saw four boats running together hammering away side by side. Certainly not for the faint hearted and I don't want to know what sort of bond the skippers have to put up to drive these speed machines. Then bless them , they turned for the down wind run and we were directly ahead of them.  I had the chance to get them as they came at me. So focus on the leader and keep pulling the trigger. Being down sun and with evening light, the camera and I were working hard to get  good focus, but some of the images came out well.
Enjoy.

This is my first look at the Marstrom 32 on the Swan up near the Canning river.

I was covering the Little Wheel, when I saw them moving the M32 out of the jetties near the western hardstand at SoPYC.     "Time", I said to a fellow photographer, "lets get a look at this".
So for 15 minutes we saw it being taken out onto the water and performing small dashes across the mouth of the Canning so that the youngsters on board could get the feel of the boat. It has apparently been out previous to this and having spoken to one of the sailors, they had 15 knots of breeze and 20+ of boat speed. That'll make the sports boat guys and the I Moth fanatics turn green with envy.

But with every good side, there is the other side, as they are not cheap to run. Have you got a spare AUD $280,000? That'll just about buy you the boat, sails and cradle. Then there is the maintenance.  And they do have a penchant for breaking masts, so much so that they now sell the masts in uppers and lowers ( about AUD $40,000 each) Or the whole mast for $65,000. ( pricing is approximate ) However their design simplicity minimizes the outlay on high tech gear and the cats have been built sturdily.

But you are buying a boat bred for speed and it will fit right into the World Match Racing tour as well. They have made the move to racing in these boats after they had been tested in their home land Sweden since they first came onto the scene in 2010. It was a big move and Perth should be proud of the fact that she has been given the opportunity to showcase the WMRT qualifying events both on the Swan at SoPYC and later at the World Championships Stage one at Fremantle.  Four of the M32's will be on show during these events.