Eun Na Mara or the Bird of the Sea.

Please note that this page is under construction and will change.

THE RETURN OF EUN NA MARA

Eun Na Mara was originally a gaff rig cutter designed by William Fife of Scotland and launched in Sydney on the 16th of February 1907 for AC Sexton of the Royal Sydney Yacht Club with the name Awanui. She was then sold to Walter Marks, of the Royal Prince Alfred Yacht Club in 1910 and renamed as Culwalla III. He sailed her from Sydney to Hobart and thence to Port Phillip Bay where he successfully campaigned for the Sayonara Cup. Culwalla III was sold in 1914 and renamed Eun Na Mara and went onto the register of the Royal Brighton Yacht Club in Melbourne.

Eun Na Mara has been in the minds of Swan River sailors since she was brought to Perth by Neil McAlister from Geelong as a Bermudian rigged sloop and during that period she won hearts and trophies regularly including a Fremantle to Bunbury race. Norm Cocks took her in hand and she sailed from the South of Perth Yacht Club with many memories forthcoming from her association with the club, including the well known Yimbala – Eun Na Mara trophy for power and sailing skippers. Eun Na Mara was bought by Andrew Bell and the late Daryl Block after Norm Cocks passed away and she was eventually sold to Nick Chapman of the RBYC in 1996. She traveled back to Victoria and was extensively restored including a new mast and a glassed hull so that she could compete once again. Winning the Hamilton Island Race week in 2001 under IRC, she became the 2001 Australian IRC champion, proving that at 94 she was still a classy yacht. The next year in Adelaide, she was in a winning position again for the Australian IRC championship and lost to competitor Loki because of a rudder that gave way. Her story is still growing and she returns to the South of Perth Yacht Club to add to the lustre that she holds.

Thirteen years older, at the age of 107, she will still be a keen competitor. Many club members have sailed on her and it’s no doubt that curiosity will have them pouring down to the club to enjoy the sight of her.

Her new owners, Ralph and Lynne Newton, plan to have some work on the topsides done and will sail her from South of Perth Yacht Club with the numbers SP1907 if the club accedes to the request and will cover both river and offshore commitments on her calendar for next season. 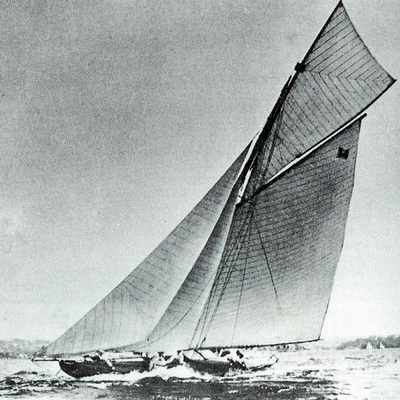 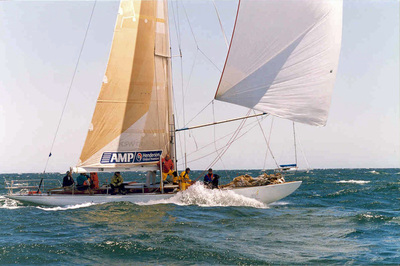 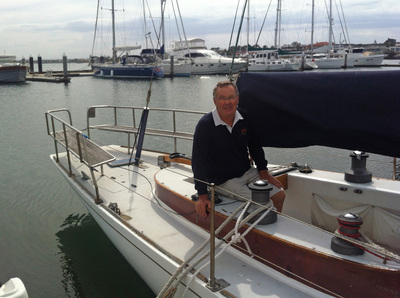 WELCOME HOME TO THE "BIRD OF THE SEA"

On a grey day, the arrival of Eun Na Mara at South of Perth was almost unnoticed.

Freshly launched into the water last Wednesday morning the 7th of May, Eun Na Mara made her way up from Fremantle Sailing Club, where she had gone into the sheds for a paint and some repair work after her trip across from Melbourne.

Arriving late in the morning, the boat was laid up against the fuel jetty, ready for the Taskers people to put the mast in and ensure that the rigging was safely in place. Having put her in place, Ralph and Lynne Newton, the proud owners and shipwright Jay Lawry settled into lunch on the Quarterdeck not even looking while the mast was lowered over the hull and deftly dropped into place. "I didn't want to look", confided Ralph, "one mistake and its all over". Once the stick was in and tidied up, Ralph took her off for a spin on the water, mixing with the intrepid sailors that were ready to start sailing and generally let her feel the waters of the Canning part and close around her hull again in that comforting gesture that seemed to say "Welcome back old friend".

Ralph plans to take her out shortly and has talked about off shore appearances with her IRC rating being sub 1 at present.

Sailing on the Swan.

On a grey Wednesday afternoon on the 21st of May, Ralph and his merry crew of Fremantle and SoPYC sailors took to the water with the sails hoisted.  As a competitor in division one in light and variable nor-westers, she put forward a very good time indeed, coming in six and a half minutes behind Phil Edman's Farr 40 Prime Minister and taking a third over the line. All this without any preparation other than hoist 'em boys and away we go. (or so I presume) The sails themselves were the ones that came across from Melbourne and by the looks of them are in very good shape. Lucky Ralph.

As to the colour of the hull, I'm not game to call her polar white as there is a definite hint of blue there. I'll wait to see what the hull looks like out on the ocean in bright light.

However the game is afoot now, she's on the water and can only continue to improve.
Ralph has given me the names of the crew that did the inaugural sail last Wednesday and they are; Rob Thomas Rear Commodore Sail at FSC and owner of  Finistere, Ron Greer of FSC and former crew on Eun Na Mara, Jay Lawry shipwright, Les Brooker (H28 Owner) Kim Klaka of FSC and naval architect, Mark ???? of ???  and of course the captain of the yacht, Ralph Newton.

Further images have come to light.

I'm grateful to Kim Klaka for passing the onboard images on to Ralph, who passed them on to me to put up and one from John Pierzak an H28 crew man. Well done John.

Its still a wonderful sight to see her on the water....even though the grey days that we have been having have not made it any easier to photograph her. Here are five more from last Wednesday when I had a spare moment with the camera.

Eun Na Mara goes in for a refit.

I've been invited to photograph the changes on Eun Na Mara as she undergoes some modifications at the Maylands shipyards  in Perth.

Ralph spoke to me recently, confirming the trip up to the Maylands shipyards to have Eun Na Mara worked over. From the brief chat, the entire bow section has been removed for modifications and replacement of corroded steel work. A bowsprit is being added on to replace the one which was removed decades ago and the transom is being restored to it's former character. Not only that but the cockpit is being opened up as well. Many changes and photo's will be forth coming.