It's July 2017, the last day of the month and a storm has been lashing the coast for a couple of days. The wind has switched around to the south west and there's not a yachtie in sight of Fremantle. So a quick run down to North Mole and the walk in to Rouse Head brought back memories of the father - son combination I saw on the last visit.

Not going to happen today, but the waves were good and again I concentrated on the standouts in the pack. Some of these images have been tweaked a little to emphasis the combination of light and water. But you can be the judge of it. I will admit that the second shot of a magnificent carve across the face wasn't up to the usual pin sharp accuracy that I get from the new lens, but it was so good I included it anyway.

One small incident on the day stood out when I heard the crack and rumble of a storm cell passing behind me over the city of Freo. Stop and think of the blokes in the water. Then again they were blissfully unaware as I found out having gone back to my car, to find one of the people I'd been photographing packing up his board and getting changed. He hadn't realized what was going on and I didn't think to ruin his day by telling him of my undignified dash for cover as the lightning crackled above my head. So be it. 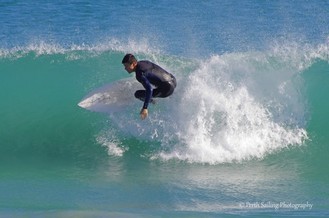 What do I do when I get a day off?

The lawns are mowed, the roses pruned and I've just heard that there is a bit of swell around the coast.
I'm not going to go all the way down to Margrets, but the North Mole is a favourite spot of mine to catch the surfers at their best and I can get the side on shots that I favour.
The story really evolves around a father and son that I saw off North Mole and the way that the father was working with his already capable son and the dedication that I saw there.
Sitting on the rocks at Rouse Head ( on the way to North Mole ) you are looking almost straight down on top of the surfers. You have to walk in, but that's fine and it's really best during the afternoon when you are not shooting into the sun, but the waves were coming through and the sets were on occasion, head high or better. In the main there are three sets of images that I was shooting. The father and son, a boogie board rider and a slightly older guy riding a rather longer board than most.  You'll recognize them when you see them, but I must admit I was taken by the skill of this young surfer, I guess they still call them grommets but he's above that rank already. If you know who he or his dad are let them know I'm happy to pass on an image or two to put on the fridge.